Tutorial Setup and Configure Apache on Admin RDP (2012, 2016, 2019) step by step. When you are dealing with the world of web hosting and servers or using localhosts on your personal computer, you have probably come across the name Apache. If you would like to know what the Apache web server is and how you can configure it, join us in this article. Apache is developed by Apache Software Foundation and is available to users. Apache web server is the most popular and famous web server in the world. The Apache HTTP server (Apache HTTP Server), often referred to as Apache, has played a key role in the development of the web and the Internet.

Apache is a free Open-Source program used with web servers to manage web applications as well as resources. This program supports Perl and PHP languages and runs on most operating systems and runs in the background of an operating system and delivers content such as HTML pages, multimedia, and CSS Style tabs over the Internet. This web server is an application developed in 1995 by the Apache Software Foundation, which has become the most widely used software on the World Wide Web today.

Apache supports more than 60% of all websites. It supports many operating systems. These include Free Security, Linux (all distributions), Mac OS X, Windows, and more.

Apache has special features and the most common application of this program is related to htaccess, which is using by professional designers in the Linux environment. Here are some of the features of Apache:

– Apache is open-source and free, and even free for commercial use

– Has a module-based structure

– Has a simple configuration

In this section, we want to deal with Setup Apache on Admin RDP. The first step is to log in to your Admin RDP. Open Remote Desktop by searching your Windows Start menu. Then enter the desired IP to enter the RDP Admin and click Connect. If you are asked for a password, you must enter the server login password. If you do these steps successfully, you will become an Admin RDP environment. 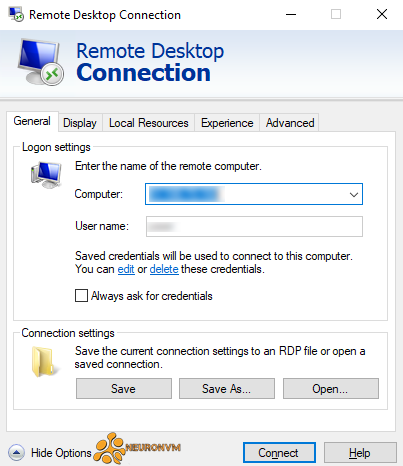 After successfully entering the Admin RDP environment, you must open one of the browsers you want. Then, you must download the Apache webserver.

Once the Apache download is complete, you should go to the location where you downloaded the file. Then you have to extract it in the place you want. Note that after unzipping the file, you should see the files of this web server. In the next step, we will teach you how to configure Apache. be with us.

Now the time to configure Apache. First, you should locate the file “httpd.conf” and open it in a standard text editor. Apache can be installed anywhere on the system, but you must change the SVROOT settings to indicate your compressed location:

If the httpd.conf file does not have the SRVROOT variable, update everything manually as in the following examples:

1- Now you need to add ExecCGI to the Options directory and locate the following line:

and then you must append “ExecCGI”:

This means in Apache that CGI/Perl scripts are allowed outside of the CGI-bin director.

2- You need to find and uncomment the following line by removing the # sign from the beginning of the line:

and then add the following line to it:

These two lines show how to handle the .cgi / .pl file to Apache.

3- You should add the following command to the end of the httpd.conf file:

This allows Apache to ignore the first line of .cgi / .pl files and instead determine the location of Perl through the Windows registry.

How to Setup Apache on Admin RDP

Now it’s time to start Apache. First, go to the Apache extraction location and open the command windows/PowerShell prompt in the bin folder. 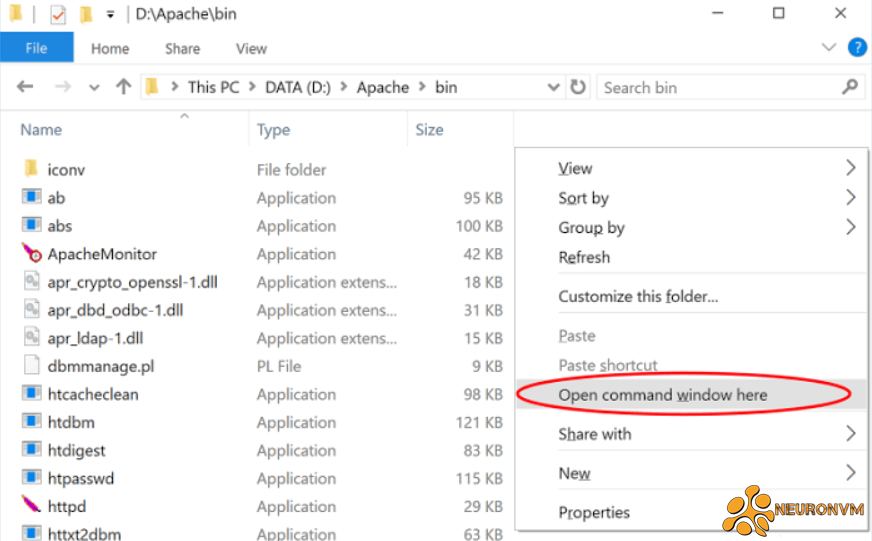 After opening the command prompt, enter the “httpd.exe” command to start Apache.

Note: If you open the PowerShell prompt, you must enter the command “D:\Apache\bin\httpd.exe” to start Apache.

Now you should allow access as appropriate after seeing a windows Firewall prompt. The point to note is that you must have access to Apache through the firewall. Otherwise, other devices will not be able to connect to the webserver. So allow access accordingly: 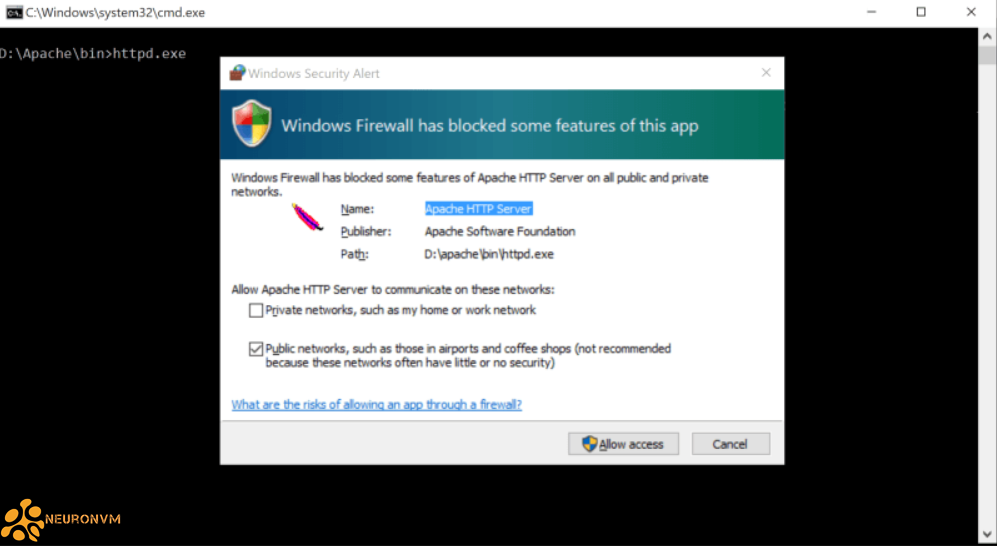 At this point, you should check the Apache. Go to http://127.0.0.1 from your web browser, provided the previous command window is open. If Apache is running, you must see the image below.

Now you should install Apache as a Windows service. After that, you make sure it runs all the time. To do this, open the command prompt again and enter the following command:

Or if you open PowerShell, you can run the following command:

Then you should enter:

Now you must receive a message that Apache is installed.

Type the following command to start the service:

Apache has an “Apache Monitor” with which you can control the current state of the Apache server and start, stop or restart the server. Double-click ApacheMonitor.exe to run the utility. Also, to run it automatically when Windows starts, put a shortcut in the Startup folder.

You can press WinKey+R and type “shell:common startup” to access the Startup folder faster, in Admin RDP. 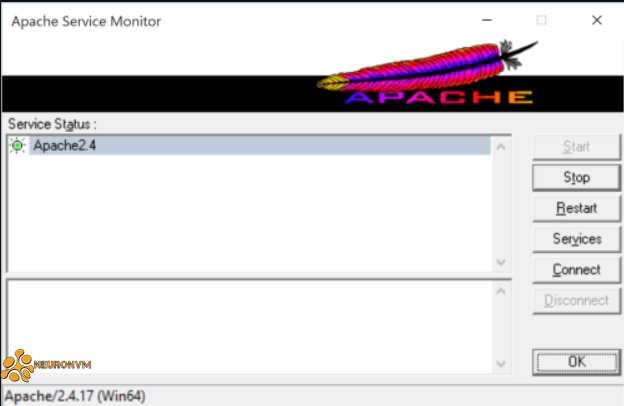