Fathom Analytics is a free, open source web analytics program that focuses on simplicity and privacy. These are written in Go and sent as a binary, simplifying installation. in addition to installing and configuring Fathom, install Nginx to act as a reverse proxy for Fathom. Also, enable secure HTTPS connections using Certbot to download and configure SSL certificates from Let’s Encrypt Certificate Authority. In this tutorial, we will learn How to Install Fathom Analytics on Ubuntu 22.04. You can also purchase a Linux VPS server from the NeuronVM website if you wish.

Fathom Analytics is an open source platform. This analytics software monitors the behavior of website users without collecting their personal information and provides you with a comprehensive analysis of the content and visitors of the site. It should note that Fathom does this by respecting the privacy of its users and without selling or sharing this information. This is while you can easily use this platform for your websites and at any technical level.

Like Google Analytics, which is enabled simply by inserting a block of JavaScript code at the bottom of the file, this tool has a very simple function.

Of course, keep in mind that to use this MIT-licensed open source tool, you must first make sure the Go language is installed on your server.

2) Domain name that refers to your server’s public IP address. For example: admin.com

How to Install Fathom Analytics on Ubuntu 22.04

To install Fathom software, first download the latest version, then extract the executable file to the /usr/local/bin folder. Enter the following command in the directory. List /tmp is suitable:

First go to GitHub for the latest version of Fathom software, then find the file with a name like fathom_1.2.1_linux_amd64.tar.gz, the version may be different. Copy the link, then use the curl command to download the file from the link you copied:

You must have a fathom_1.2.1_linux_amd64.tar.gz file in the /tmp folder. Use the tar command to extract the fathom file and move it to / usr / local / bin:

The sudo command is important because /usr/local/bin is a protected directory, you need superuser privileges to write to it. Use sudo and chmod to update fathom binary permissions:

This method causes the fatum to be executed. To check it, run the following command:

This command displays the Fathom version and additional details. You have successfully downloaded and installed the Fathom binary. Now configure and run Fathom for the first time.

How to Configure and Run Fathom on Ubuntu 22.04

Before configuring Fathom, you must create a new fathom user on your system. The new account will be used to run the Fathom server to help isolate and secure the service. Now create a new user named fathom with the adduser command:

This method creates a special user — system, meaning that it does not have a password and cannot log in like a normal user. It also creates a fathom group using the –group flag and a home directory in /opt/fathom. Go to the main fathom user list now:

Your request changes like [email protected]: ~ $. When you exit this shell, every command you execute will be executed as a fathom user.

Copy the string, then the env file. Open a new one to configure:

This will open a new blank file in the nano text editor. Use the editor you want. Put the following in the file and make sure the random string is updated to the string you created earlier:

This configuration first specifies that the server must listen to port 8080 localhost (127.0.0.1), then use the SQLite database file called fathom.db. Save and close the file, then press CTRL+O on the nano and then ENTER to save, press CTRL+X to exit. Now, you can add the first user to the Fathom instance:

Since this is your first time running fathom with a database configuration, you should notice some basic database migrations:

The fathom.db database file has now been created and the user added. Setup the Fathom server for testing now:

In the second terminal connected to the server, use the Fathom sample home page using curl:

You should see a few lines of HTML code printed on the screen. This method indicates that the server is active and responds to localhost requests. Return to the first terminal, then press CTRL+C to exit the fathom server process.

Now that you have finished executing the commands as a fathom user, exit the session:

Fathom is now fully configuring. Next, set Fathom to run as a Systemd service.

How to Setup Fathom as a Systemd Service

To run the fathom service when you are not logged in to the server, set it up as a service with Systemd. Systemd is a service manager that manages stopping and restarting services on Ubuntu and many other Linux distributions.

The fathom.service file you create contains the configuration details that Systemd needs to run the server properly. Open the new file now:

Add the following commands into the file:

This file specifies when the service should be launched (After = network.target, that is, after the network is booted), which should be run as the user and the fathom group, which Systemd should always try to run if it exits. Restart (Restart = always), the /opt/fathom folder should run and what command should use to run the server (ExecStart = /usr/local/bin/fathom server).

Save and close the file, then reload the Systemd configuration:

Enabling the service means that Systemd launches it automatically at system startup. You must also manually configure the service only once:

Note in the previous command that you can skip the .service section. Finally, check that the service is running:

This service is restarting and run on the 8080 Localhost port. Then launch Nginx as a reverse proxy to expose the Fathom service to the outside world.

How to Install and Configure Nginx on Ubuntu 22.04

Web servers like Nginx vs. your application server can improve performance by making caching, compression, and static file service a more efficient process. Install Nginx and configure it to redirect proxy requests to Fathom, meaning that it takes care to send user requests to Fathom and back again.

Then, create a new Nginx configuration file in the /etc/nginx/sites-available folder. Here’s the name fathom.conf, but you can use another name:

Put the following in the new configuration file, make sure you replace your_domain_here with the domain configured to point to your Fathom server. For example, fathom.example.com:

Configuration is currently HTTP only. Let Certbot configure SSL in the next step. Continues to configure login locations, then sends traffic to the Fathom server at http://localhost:8080, and adds some important proxy submission headers along the way. Save and close the file, then enable the configuration by linking it to /etc/nginx/sites-enabled/:

Use the following command to check the syntax of the configuration file:

Download the nginx service to select the new configuration:

The Fathom site should now be accessible via plain HTTP. Download http://your_domain_here. It will be as follows: 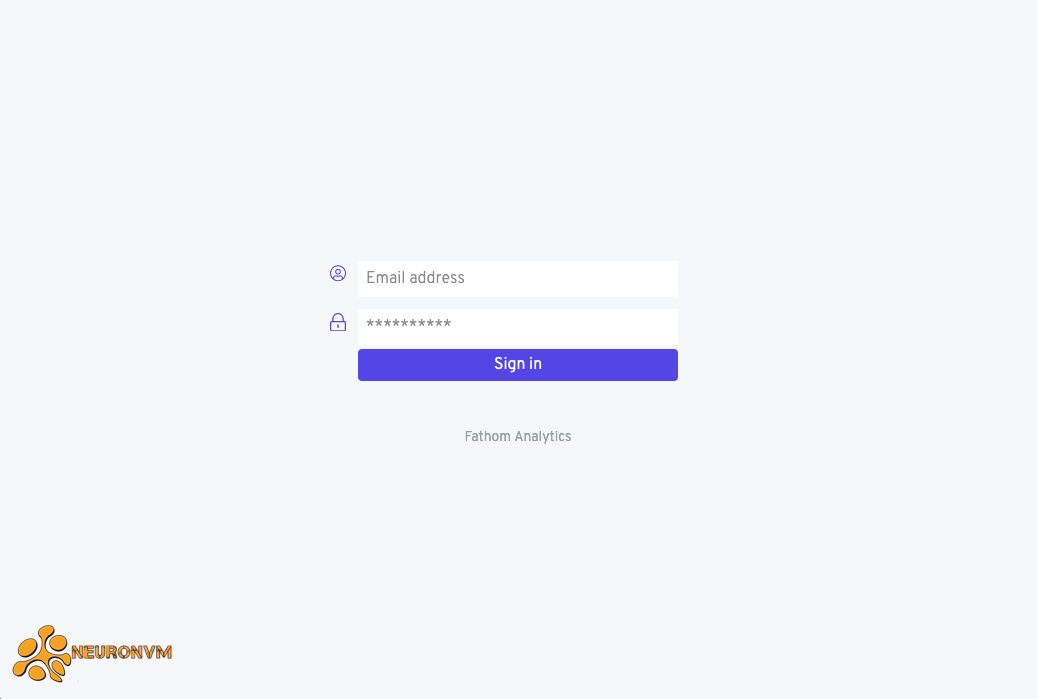 Now that you have your site up and running via HTTP, you need to secure the connection with Certbot and Let’s Encrypt certificates.

Then, run the certbot in –nginx mode and specify the domain that you used in the Nginx server_name configuration:

You will ask to agree to Let’s Encrypt Terms of Service and enter your email address. You will then ask if you want to direct all HTTP traffic to HTTPS. Let’s Encrypt will then confirm your request and Certbot will download your certificate:

Certbot automatically reloads Nginx to receive new configuration and certifications. Reload the site and it should automatically switch you to HTTPS if you select the redirect option. Your site is now secure and you can log in with the user information you setup. Once you have successfully logged in, you will see a message to launch your first website with Fathom. 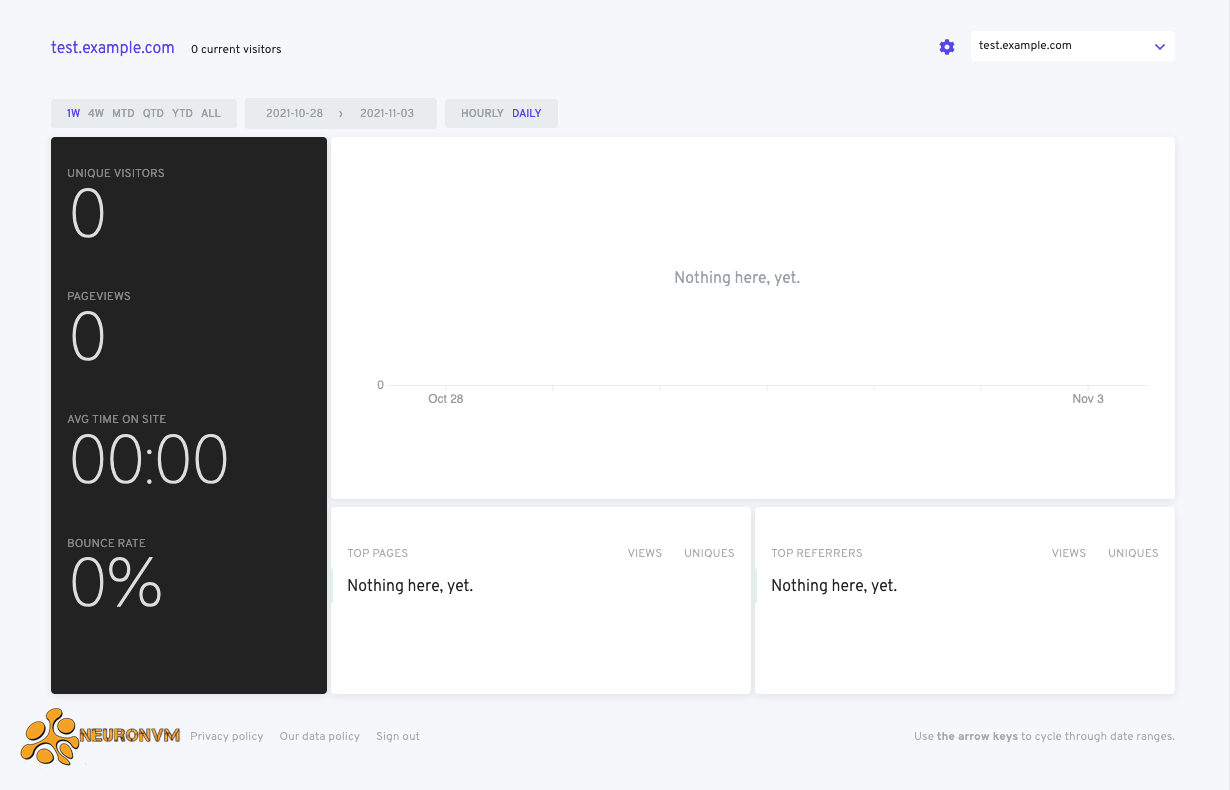 After completing this step, you will see the dashboard of the site you just launched: 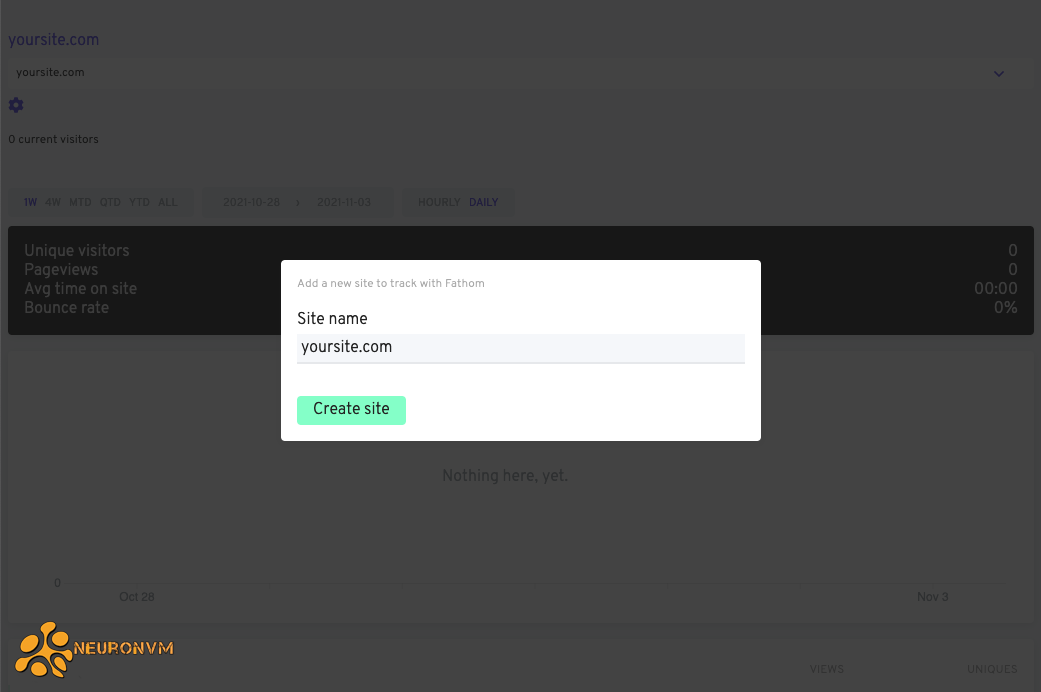 You have successfully installed and secured your Fathom analytics software.

In this tutorial, you learned how to install Fathom Analytics on Ubuntu 22.04. setup an Nginx reverse proxy and secure it using Let’s Encrypt SSL certificates. You are now ready to finish setting up your website by adding a Fathom Analytics tracking script to it. We hope you find this article useful. Share your comments with us via the form below.